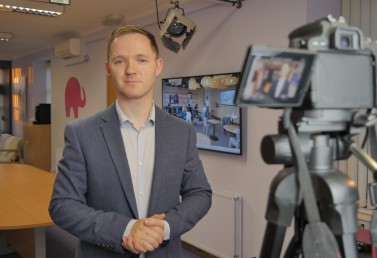 Colin Stone is a Scottish TV presenter and broadcast journalist with more than 12 years of live broadcast experience.

Making his television debut at the age of 22, Colin has gone on to report live from the likes of the Scottish independence referendum, the devastating Glasgow School of Art fire in 2018 and the 2014 Commonwealth Games. He's anchored close to 1,000 live televised news bulletins, reported in over 750 live TV segments and read more than 2,000 radio news bulletins.

Before a move to presenting and voiceovers, his most recent journalism role was as Senior Reporter for Radio Clyde News in Glasgow. Previously, he was a reporter and news anchor for national broadcaster STV.

Colin currently works as Communications Lead with Pink Elephant, helping people prepare for television and radio interviews. His freelance status also allows him to work for the likes of Up Next Studios, Pronunciator.com and STV Creative - as well as speak to the media as a cryptocurrency analyst.

Prior to joining Scottish Television News, Colin helped launch STV Glasgow as one of the channel's main faces. On the flaghship programme 'The Riverside Show', Colin notched up live TV segments every single weeknight covering news, sport, cultural festivals and local events, as well as conducting some high-profile interviews. Colin also made appearances on STV Channel 3 programmes The People's History Show and Edinburgh Fringe Festival before moving permanently to STV News in January 2016.

Colin is a BJTC and NCTJ-accredited broadcast journalist who - prior to his career in television - worked for a number of media outlets, primarily in radio. After freelance stints with the likes of Sky Sports News, Real Radio and the British mainland's most northerly newspaper the John O'Groat Journal, Colin joined Clydebank radio station YOUR Radio as a newsreader and journalist, which extended to featuring on the flagship breakfast show with LBC's Darren Adam.
On top of this, Colin has carved a niche for himself in the world of voiceovers and music. After co-founding and subsequently hosting the weekly European football podcast Jumpers for Goalposts in 2011 - garnering over 20,000 SoundCloud followers in the process - Colin has gone on to do voiceovers for the likes of VisitScotland, Crerar Hotels, STV Creative, KCA Deutag, RP Alba Ltd and countless others. He also co-hosts a weekly entertainment podcast called Seesaw Parade in which he discusses news, movies and reviews.
Colin's ability as a musician has allowed him to contribute to a number of recordings from around the world, as well as pursue his own side projects. In recent years, he has played the banjo, guitar and fiddle - all from his own home-based studio - to complete tracks by musicians from the United States, New Zealand. Japan and the UK. He has also written and recorded over 60 original songs in various genres since 2011 - click here to read more.
With his skills in journalism, television presenting and voiceover work, Colin has gone on to host a number of corporate and private events. Since 2014, he has hosted everything from the Hard Rock Rising Final in Glasgow to classical music concerts at the Royal Conservatoire of Scotland. In 2017, Colin took on the role of spokesperson for crypto startup Apollo Currency, which you can read more about here. Colin hosted three giveaway livestreams for gaming giants ASUS in December 2020, and was part of the jury who chose the winner of the RTS Current Affairs Home award in early 2021.
As evidenced by his success in the media, Colin is a dedicated and experienced professional who thrives in every aspect of his work, be it as a television presenter, newsreader, reporter or media trainer.
For more information or to contact Colin Stone, click here.