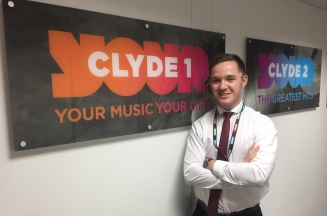 Although Colin's most recent role in journalism was as Senior Reporter for Radio Clyde News, his career in radio originally began at the age of 17.

Hosting his very first show from Glasgow Caledonian University's student station Radio Caley in September 2009, Colin progressed to report for the likes of Tay FM, Forth One's 'Game On', YOUR Radio and Real Radio over the following years.

After three years with STV, Colin joined Radio Clyde as their Senior Reporter in June 2017.

During his time at Scotland's biggest commercial radio station - with a listenership regularly in excess of 250,000 - Colin reported on the murder trial of Blair Logan, the 2018 European Championships, the Cameron House Hotel fire, the Beast from the East snow storm and the devastating Glasgow School of Art fire.

Since leaving Clyde, Colin has ventured further into the world of voiceovers. In 2020, Colin recorded his first national TV advert for Scottish Television, as well as campaigns for Crerar Hotels and VisitScotland. Colin's also lent his voice to children's TV ads, which have aired both on TV and online.

Listen below for Colin's showreels, plus a recent edition of his weekly entertainment podcast Seesaw Parade - which you can listen to on Spotify.